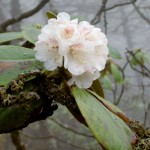 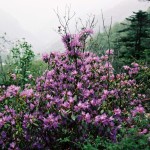 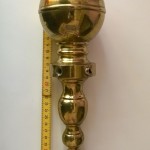 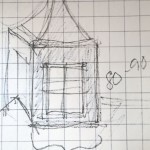 A new pavilion was built 2014 on top of an artificial hill in the center of the arboretum. The name “Höjdpunkten” means The Summit in English. In Swedish it has a double meaning in this case – the most beautiful and the highest. The hill is a result at a pond-project 2005 where a new pond was digged up and the clay masses formed a “Fuji-cone” of 4-5 meters high. Except a suitable place for a pavilion it gives perfect sites for planting some warm loving shrubs and trees like Viburnum bitchiuense and Catalpa speciosa. Near two of the corners there were planted young maples with bright red autumn-colours. They were collected as seeds from planted Japanese maple Acer palmatum var. amoenum at the courtyard of Kanaya Hotel in Nikko Japan 2007. Sten Ridderlöf 2015-03-01.

2014 were two pavilions built in Arboretum Lassas Hagar. This one is named “Brunnspaviljongen”, a pavilion where you can get fresh water. In a professional arboretum there are yearly taken lots of measurement and photos and making notes of the living material, which means the trees and the shrubs. But surprisingly less or none documentation is normally made when paths, pavilions, small houses are built even if they take both space and change uses. My wife Barbro and I wanted to create an open place under roof not far from our house where we can enjoy the garden and a pond from time to time. The place was also aimed to be used for visitors for a time of contemplation and rest and in case of rainfalls. We designed the pavilion, as you see below, with strong pillars with simple roofs in the edge of the rock so we can plant rhododendrons inside the pavilion and under roof. The table was produced in the material. A small open shed was built in same stile connected with the pavilion. Sten Ridderlöf 2015-03-03.

A third small house was built 2012 in the area named Bredablick located in the Centre of Arboretum Lassas Hagar. As a curiosity the round window on the house is a vessel valve from 1900s and originates from a ship dismantled in Bremen Hafen Germany. Around the storehouse are some few trees planted: Pyrus ussuriensis, Prunus serrula, Malus ’Profusion’ and Malus x zumi ’Professor Sprenger’.

During 2011-12 were built two Russian log houses in the arboretum. In this album you find a documentation step by step of the building process of this small but beautiful house. All wooden material are either Siberian Pine, Norway Spruce or Siberian Larch. The construction was made in St. Petersburg Russia and we designed the house ourselves.

Two Russian log houses were built in the arboretum 2011-12. The place is named “Bredablick”. It is the same meaning as “Bellevue” in French or “Belvedere” in Italian. A beautiful sight on a small hill with an open landscape and ponds below. We started to cut down most trees and shrubs on the hill and digged out the ground for plinth foundations. In correspondence with a Swedish firm, Siberian Conifer AB, we designed the two log houses. The 22 cm timber in walls are of Siberian Pine (Pinus sylvestris) – all more than 100 years old and grown very slowly – and the roof trusses of Spruce (Picea abies) of substantial dimensions. On floor is Siberian larch (Larix sibirica). The trees originate from Siberia, probably from the European part of Russia. The construction is made in a factory near St. Petersburg. Here follows a documentation of an extraordinary log house and the building process in Svartlöga island up to now, 2015-01-04.

Among other projects 2011 in the arboretum we digged out a former ditch from early 1900s. We made the ditch as a serpentine with a small oxbow lake in the middle. Two bridges of stones were made over the new ditch and between these a small pond. Here is a documentation of the activities.